Absinth - the History of Green Fairy

Lately absinth has again become popular. A special ritual of drinking played here not the least role, with its unusual serving, destined for it accessories and comforting atmosphere, that always attracted the attention of absinth-lovers not less than the drink itself.

The Invention of Absinth

Everything began in 1792. As the legend says, while riding one day, Doctor Pierre Ordiner found bitter wormwood (Artemisia Absinthium in Latin, which gave its name to the drink). He already knew about using absinth and started his own experiments. Pierre put down the recipe of the invented medicine and used absinth as panacea from all diseases. In those days this wormwood drink was called "La Fue Verte", which means "Green Fairy" in English, and this name has been attached to the drink up to the present day. The basic component of the drink was Artemisia Absinthium, a sort of wormwood, with the help of this herb doctors treated lack of appetite and stimulated digestion. Five years later the first distillery, which produced absinth, was opened in Switzerland.

The habit of drinking absinth became universal. It was commonly considered to improve appetite before dinner. The period of time between 5 and 7 p.m. was called "Heure Verte" (or "Green Hour"). There were opened special cafes and clubs of absinth-drinkers, poets devoted odes and dithyrambs, artists created pictures and statues. The consumption of absinth constituted 40 million liters per year in France only. 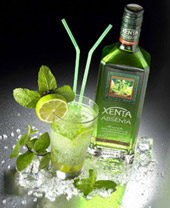 Absinth brought enormous profits, and it gave rise to the spread of counterfeits. A real absinthian hysteria began. O. Wilde wrote: "If you drink enough of this drink, you will see everything you want to see - beautiful, marvelous things". But soon fantasies turned into hallucinations, merry tumult into depression, sully, dark, bitter madness.

Absinth was accused of all the sins, even of containing poison. One horrible event, which happened in 1905, contributed much to the rise of the campaign against absinth. Gin Landfrei, a Swiss farmer and inveterate absinth-drinker, shot his whole family. This story occupied the top pages of all European newspapers. In those articles it was said, that the farmer acted under the influence of the absinth he had drunk, but the journalists completely ignored the fact that Gin had drunk several bottles of wine and other drinks that day. As a result, absinth was banned in most countries of the world. And in 1908 Article 32, officially banning absinth in Switzerland, was introduced into Swiss Federal Constitution.

Absinth is an alcoholic drink, made of Artemisia Absinthium extract. Already in Ancient Egypt people took this drink for an excellent medicine. It is quite possible that the word "absinth" originates from the Greek word "apsinthion", which means "not suitable for drinking". Pythagorus recommended absinth as a medicine good for child-bearing. Hyppocratus prescribed it for treating rheumatism, anemia, icterus and menstrual aches.

Absinth can be transparent, yellow, brown and even red, but mostly it is of emerald-green color. Traditional green color is conditioned by the content of chlorophyll, which fades away due to the influence of sunlight. That's why absinth is to be bottled in bottles made of dark-green glass. 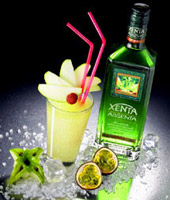 Nowadays absinth can't drive anyone mad. However, connoisseurs consider that this hallucinous effect, evoked by absinth, is brought by infusing various herbs, which secrete is volatile oils, in 75-degree alcohol. But it is worth mentioning that practically harmless light zest after 1-2 portions of absinth or fatally affecting the brains and nerve system activities, hallucinations depend solely upon the consumed quantity.

The effect of absinth is quite different with different people. It may bring just pleasant tranquil relaxation, cheerfulness, zest, unexpected groundless laughter. Absinth can make people act weird and awkward that leaves bright recollections. Some people experience the state of unexplainable aggression. Many doctors noticed that absinthian intoxication can be accompanied by slurred over, slightly distorted sight or distorted color distinction. Large objects may seem not very much distinct, small ones - virtually indistinguishable.

How Should We Drink Absinth?

There exists a special ritual of serving absinth. A silver sieve (the so-called absinth spoon) is placed over a tumbler or a glass with absinth, then one puts a piece of cane-sugar in the sieve, as slight sugary taste soothes the taste of wormwood infusion, and over it all water is poured. While being diluted with water, green transparent absinth becomes thicker and acquires slightly yellow hue. Today in most restaurants and bars the process of serving absinth turns into a real spectacle. They put a piece of sugar in a spoon, spill some absinth there, then set the contents on fire and wait till the sugar gets melted. The acquired caramel is quickly poured into the tumbler with absinth and got stirred.

Among people, who preferred absinth, there were many famous personalities. Here we may mention Charles Cross (he was a poet, physicist, artist and musician). He could drink twenty portions of absinth a day, and for doing it very often he became notorious in most absinth-cafes in Paris. Then we should name Ernest Hemingway, who drank absinth even after it had been banned in most countries of the world. According to the rumors, he managed to preserve several bottles of this drink, when he lived in the United States. But maybe the most famous absinth-drinker was Vincent Van Gaugh. No one knows exactly the period of his devotion to absinth. Being a talented artist, Van Gaugh suffered from mental problems. It is quite possible that it was this mental disorder that eventully led him to drinking turpentine, a substance for producing paints. At the end of his life he suffered from acute alcoholism and absentism.